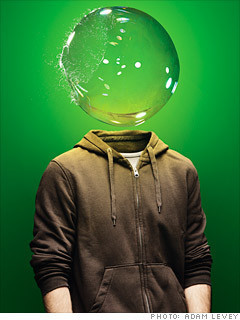 Actually, I didn’t quite say that correctly.   And it’s worth a bit of a discussion why.

The only time a company is technically worth a certain amount of money is when a hundred percent of its shares is purchased in a private transaction like a merger or an acquisition, or a percentage of their shares are floated on public markets, as in an IPO.  In both of those scenarios, each share of the company is worth the same as the next.

That’s a big difference between a true exit like an IPO or an acquisition and what we’ve seen recently with these high valuation financings. Because in a private financing, the valuation that is reported represents the price that investors were willing to pay for the most recently issued series of stock.  And the shares from that particular series of stock are different from the rest of the shares in the company.

When you look at the rumored Snapchat valuations of over 3 billion dollars, it’s difficult to understand how an investor can think that Snapchat is worth that much.  Because the truth is, it’s not. Those rumors, even if true, don’t actually value Snapchat at 3 billion dollars.  To be precise, they are bidding on a price per share of a specific series of stock.  As matter of common discourse, we multiply that number by the total number of shares outstanding and call that a valuation.  But the difference still exists and it’s important.

Regardless of what we call the valuation, who’s to say whether the investors setting these valuations are correct in placing their bet?  It is worth taking the time to understand what risks these late stage investors actually face.  It may just explain why they’re able to stomach such high prices.

If I put a hundred million dollars into Snapchat today at a 3 billion dollar valuation, three things can happen:

At some point in the future, Snapchat IPOs or gets purchased for more than 3 billion dollars. I reap the rewards through an appreciation of my stock price.  That’s what happened to everyone who invested during Facebook’s long run up.

Snapchat gets bought or IPOs for less than 3 billion dollars, but more than I invested in the company.  I’d actually do just fine. It’s not the result I was hoping for, but it’s actually not bad.  I get a hundred percent of my money back (assuming I’m the most senior investor) plus I also earned interest on my money every year.  While the interest rates vary, often they are as high as 8%.  So basically, my investment in Snapchat looks more like an interest bearing bond than anything else.

It goes bankrupt or sells for less than the amount I invested in the company.  I lose my money along with everyone else.

And now things start to look a lot more sane from an investment perspective.  With acquisition offers already rumored around 3 billion dollars from Facebook, it’s hard to imagine a world in which Snapchat dies so dramatically such that that the acquisition value dropped below a hundred million dollars.   I won’t say it can’t happen – but that’s effectively the bet I’m making as a late stage investor.

So now you can see why these valuations get so high.  It’s because the risk profile of the last money in is actually pretty low.  They can afford to get into these bidding wars because they have the confidence that they are likely to at least get their money back, and yet they still get upside exposure if things go extremely well.

I bring all of this up because I feel like our tech world is under the microscope again. The rest of the economy is struggling to find its momentum.  These people, watching from a far, have a strange mixture of envy, fear and disbelief.  They applaud our innovation.  They invest in our IPOs.  They worry that we’re in a bubble and that it will pop.

The way bubbles actually occur is not simply based on high valuations.  Fundamentally, bubbles need the mechanics of a ponzi scheme in order to exist.  A bubble can occur when speculators invest with the belief that a sucker will come along after them to buy the stock at a higher price.   The bubble pops when those suckers get tricked one too many times and then an incredibly painful game of hot potato takes place as everyone realizes they’re holding worthless stock.

All of the firms making investments into the Snapchats and Ubers of the world are sophisticated private equity funds with capital pools so large they can afford to take large risks.  After our little discussion, you can now see that their bets are actually not quite as high risk as commonly thought.

No, the real danger still comes later when the public markets get involved. When those retail investors with their mixture of envy and disbelief try to cash in on something they don’t understand.  That’s when we should be nervous.

Our friends at Mattermark recently pointed out that current tech IPOs are no where near where they were at the height of the bubble:

So for the time being, root for our friends and their absurdly high valuations.  Their continued success is good for all of us.  And while it’s fun to go back and forth about whether Snapchat is “worth” $3 billion or not, I wouldn’t lose too much sleep over it.  As long as we keep pumping out good IPOs, we’ll be fine.