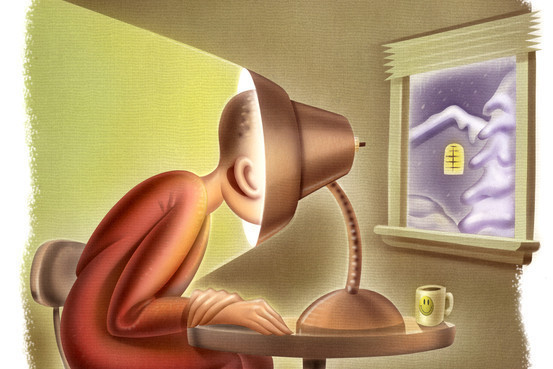 A few months past raising my Series B, 42Floors felt stalled.  I felt stalled.  This wasn’t how it was supposed to feel.  Even with an awesome team, plenty of money in the bank, and the commercial real estate industry welcoming us…everything just felt impossible.

But now we’re rocking.  The site is super fast.  Features are shipping incredibly fast.  Team is uber motivated.  And users are responding.  The metrics are up.   It’s  a joy to update investors with so much good news.

What a difference a few months makes.

This is a post about our shift in mindset.  Or at least mine.

The San Francisco Indian summer is coming to an end.  The days have been long.  We’ve had several months of warm weather and sunny days.  And I see optimism and hope everywhere.  I feel optimism and hope.  It doesn’t surprise me at all.  I make the same observation every year.

But the most amazing thing would happen each year.  As summer came around, the fog would lift, my mood would brighten and almost magically life would get better.

I’ll step back for a second for those of you who are not familiar with seasonal affective disorder and give you the briefest of overviews.

I urge you not to be too afraid of the words disorder or depression.  In fact, just think of it as the winter blues, which affect us all.  And all seasonal affective disorder is, is a bit more of the winter blues.

I’ve been waiting to write this post for several months now because I wanted to write it when everyone was really clear in their heads, including me.  I feel like last year’s winter was really tough on the startup community.  We lost a couple of our own to suicide.  I don’t know either of them close enough to comment on them specifically. But I do know that many of my friends were fighting with winter depression last year.  And only a few them knew how to deal with it.

For anyone that knows me personally or has read my posts on sleep, you know that I wake up to extremely bright lights every morning. I’m not talking about a simple sunrise alarm clock. My lights are so bright that they actually alter the chemistry of my body.  With only 30 minutes of exposure in the morning, my uber-bright lights stimulate serotonin within my body and that, along with some vitamin D3 supplements, is my antidote to seasonal depression.

We do so much damage to our bodies by being inside most of the time, and that damage is compounded in critical ways during the winter months.  The light your body receives through office lighting is not nearly bright enough to replace the rays of direct sunshine.  It only actually takes about 30 minutes of bright direct sunlight to stimulate serotonin.

If you think back to last winter, how many days in a row did you go without getting at least half-an-hour of direct bright sunlight?  I would love to recommend that everyone just make sure that they spend time outside in direct sunlight, but what I found is that while you’re in the midst of seasonal affective depression, you are less motivated to try to make it better.  The haziness in your eyes is simply too blinding.  So that’s why I waited until now to post this because if this is resonating with you, now is the exact time to act.  With the memories fresh in your mind, prepare yourself for the upcoming winter.

How to Beat The Winter Blues

If any of this post has been new to you so far, you have a duty to yourself to do your own research.  I would recommend starting here, here and here.  If you start to feel like this stuff is too clinical, read about it from your entrepreneur peers like Brad Feld, Steli Efti, and Allie Brosch.

You want to get lights that are at least 5,000 lux and preferably 10,000 lux.  I recommend checking out Biobrite – that’s your first stop with the Per3 and the Philips light products as secondary options.  Anything that doesn’t explicitly say it is either 5,000 or 10,000 lux is not going to do the job of stimulating serotonin.

Most Americans are chronically deficient of vitamin D3 and there is very little harm to taking a supplement.  You can buy them at any grocery store or Amazon.  Getting in the habit of taking one every day, especially if you’re someone that’s prone to any type of depression.  You can also check your actual levels with your doctor.

Did you exercise straight through your winter depression or did it fall away?  I’ve always found that the only exercise routines that work while I’m also feeling lethargic are the ones that involve some sort of social commitment – team sports or group workouts.  Those are the type of exercise routines you want on your side.  Anything that relies on individual motivation can fail on you.   At 42Floors, our job is fixing commercial real estate search.  But maybe the best part is that we offer group workouts everyday.

If you know that the winter always gets to you, plan a vacation from it.  A simple one week vacation to somewhere warm (and more importantly, bright) will often be enough to snap you out of it.  And once you get a little reprieve, you’ll be able to gain some perspective and start on all these other things that will help get you back on track.

Beware of fights with family, friends and coworkers

In each of my high school depressive episodes, I fought with lots of people around me.  At the time, I didn’t feel depressed.  Because nothing was ever my fault.  I felt oppressed by all these people who just didn’t get it.  Now, I can see though that all that was really going on is the days were short and I wasn’t getting enough D3. So let this be a little trigger that says if you’re fighting with the people around you and it’s winter time, the entire problem may simply be not enough sunlight.

My therapy is blogging.  I’ve learned to share my thoughts openly and it has released tremendous pressure.  It’s not for everyone.  I can tell you now that writing this post wasn’t easy.  For most, simply talking to a friend will help.  But here’s the real trick.  If you’re the friend of someone that you can see is suffering–you have to be the one that approaches them.  Go for it.  It will be a little awkward, but I promise they’ll appreciate it.

By the way, now is the time.  Not three months from now when you won’t be motivated enough to do something about it.  Build the habit now.  Winter is coming.