Just chatted with an entrepreneur that has gotten himself into a bit of trouble.  When he started his company, all of his cofounders took C titles.  He was CEO, his best friend and co-founder was CTO, and their marketing friend became CMO.  That was 2 years ago. Now the company is rocking along and they're scaling like crazy.  His best friend/technical cofounder is in way over his head and they have the capital to hire someone really experienced.  The problem?  The new hire wants to be CTO.  Best friend cofounder doesn't want to give it up. Well, Fuck.

These are the type of problems that customers don't care about.  This internal squabbling is a distraction that can rob a startup of one of its most valuable assets: morale.  Startups thrive on everyone working their asses off, believing in a dream that often appears nearly impossible.  The glue that binds everyone through the tough times is that it's fun.  When a startup loses its fun feeling, you can be sure problems are on the horizon.  Infighting over petty shit like titles is one of the most efficient ways of zapping morale. 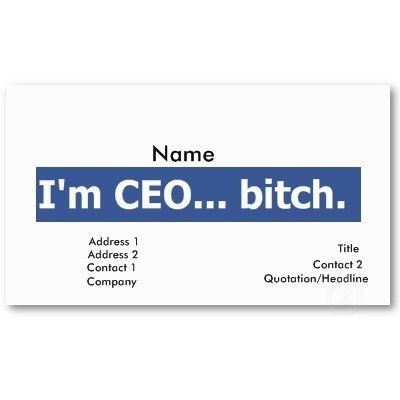 And when it comes to companywide issues, there's only one person to be held accountable: the CEO.  This one is clearly on him.  Yeah, the current CTO is being childish and petty, but he's not the root cause.  Here's how the CEO got himself into this mess. When he was starting this company with his best friends, they had to pick one person to be CEO.  Investors always want to know and it's a bad sign if a company hasn't picked a leader.  Very quickly, our newly minted CEO started introducing himself as 'Cofounder and CEO of AwesomeSauce Inc.'  There's was an inflection his voice as he spelled out C-E-O.  It was pride.  I should know, I used to love to say it.
It feels damn good to call yourself the mother-fucking C-E-O.

The problem is it's barely true.  Really, you're just a cofounder.  With a little 'c.'  99.99% of all decisions (probably 100%) are still being made with full consensus of the founders.  You don't have direct reports.  You don't report to a board that has the power to fire you.  You take out the trash just like everyone else.  In fact, you do so more than other people because they're too busy building the product and you don't want to disturb them.  But when you prance around with your C-E-O, you make your cofounders want the same thing.  And so you hand out other C titles...it's only fair.
And now you're in a mess. My suggestion is ditch titles completely.  For as long as you can.  Eventually you'll need them when you're looking to hire more from outside and when heirarchy becomes a necessity.  But until then, skip it.  And if your early guys ask what they should put on their resume,  tell them put anything down.  Seriously, whatever they want.  Who cares?
For my most recent startup, we nipped this sucka right in the bud from the beginning.  We agreed that everyone is either a cofounder or an early employee.  That's it.  There is no sign of the CEO label.  Facebook, Linkedin,  public presentations, Crunchbase, conversations with friends...everywhere.  It's cofounder.  And damn, I'm fucking proud of it.


And please come check out our new startup, 42Floors!