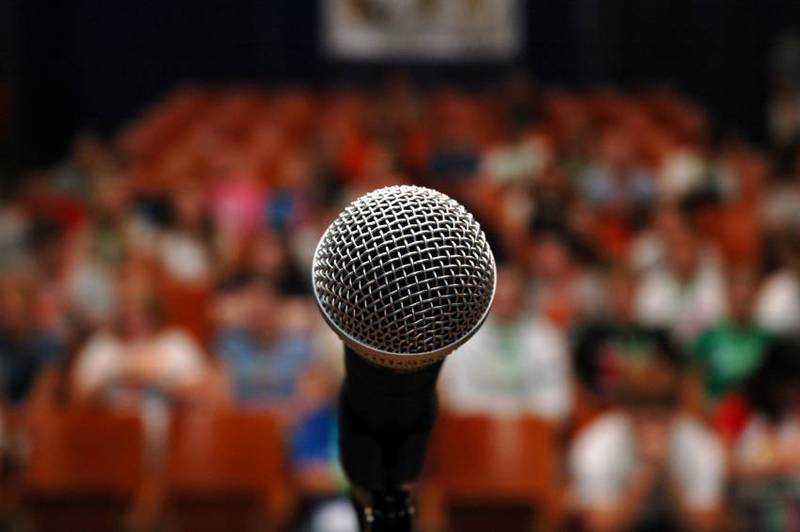 I just gave a presentation on 42Floors to 150 people.  It went well. I was really proud of:  1) our team, 2) our product and 3) the way we were able to present it.  It was as if we were telling people about it in our living room, but there just happened to be 150 people there.  Afterwards, several people told me that it felt like it was a very polished presentation.  But the reality is we didn’t practice at all.  In fact, three minutes before we went on stage, my co-founder turned to me and said, “Jason, we really should’ve practiced.” I said, “Nah, don’t worry.  We’ll be fine.” And we winged it, and it came off ever so naturally.

Before I pat myself on the back too much, let me tell you how I felt inside.  Thirty seconds before I was supposed to go on, I was standing there on the side and all of a sudden my heartbeat went from normal to racing like I was in the middle of marathon.  Uggghhh.  I hate it when this happens.  It's kind of like how you feel when you blush: you're reminded how little control you have over your own body.  For a brief moment, I was upset with my body for reacting this way. I was upset with myself for reacting this way, actually.  I should be more confident than this.

For some background, I’ve done a tremendous amount of public speaking. I did speech and debate in high school, I’ve spoken to lots of large crowds, I have given this type of presentation many, many times before. This was also a really friendly crowd, and it was super informal. There was no reason for me to be nervous. But, there I was ready to go on, and I was worried that people standing near me would literally be able to see my heart beating this fast.

However, in those thirty seconds, from when my anxiety took hold until I started speaking, I squashed that nervousness almost completely.  And that's what this post is about.

The key to public speaking is establishing a routine that solves for the thirty seconds between when your anxiety starts and when you need to go up on stage.  After that nothing else really matters.  Most normal people do not engage in public speaking regularly enough to be able to actually change any of the fundamentals about how they speak.  The very best you can hope to do is to not sound worse than you do when speaking in your own living room.  And that itself is actually a really good axiom to start with:

Don’t try to become a good public speaker, just try to speak like a normal person while in public.

And the key to speaking normally in public is to squash your anxiety thirty seconds beforehand. Here are a few tricks that I know. Give them a shot.

How to Speak Like a Normal Person While in Public:

So this trick will take a little bit of time to develop, but it’s probably the single most important thing that I’d recommend.  When you watch a basketball player go to the free-throw line with the game on the line, he or she does the same routine every single time. It's always some sort of dribble twice, spin once routine.  With the spotlight on him, he doesn't want to think about some small aspect of his form.  He wants to not think at all.  So he focuses on his trivial routine: dribble twice, spin once, shoot.  The best he is hoping for is to shoot as well as he normally does in practice.

I do the same thing with public speaking.  I have found a very specific set of physical actions that I do seconds before I start speaking.  For me, it’s a specific stance that I get into where I stand up very straight, my toes are slightly pointed out, I take my hands and I clap them together.  I grasp my hands together really firmly and rub them slowly with my elbows held high.

I do it this way for one key reason – this is what I usually do anyway.  As in, if you see me in my own living room, surrounded by friends, recounting a story of a time when I did something really awesome, you will often find that I am naturally in this stance.  This is my natural confidence stance.  So, when I’m feeling nervous, I force myself deliberately to take on my confidence pose.

Jumping back to this public speaking event the other day.  At T minus 30 seconds, my heart was beating incredibly fast, but at T minus 25 seconds I had one thing on my mind – hands clasped together, assume the pose, everything else will work out.

You need to find your confidence pose. Whatever your two dribble, spin once routine is going to be, you need to find it long before your public speaking moment.  The single best way to find it is to ask your co-founder or friends to find it for you.  Show them this post, tell them you want help finding this pose, and then at some point in the next several weeks, they will see you do it naturally and can point it out for you.  And then, you need to figure out exactly what it is about this pose that feels good and practice it over and over again.  So the next time when you’re up on stage and you’re getting really nervous and you have that weird feeling where you just don’t know where to put your hands and you just know that in your pockets is like the most awkward thing in the world...at that point – dribble twice, spin once, and shoot.

Powerpoint is this devious device that takes reasonably good speakers and makes them painfully bad. Traditional bullet-point laden Powerpoint decks are only useful for communicating your ideas with visuals and emailing them to people. They are not useful for aiding you in your speaking ability.  And that’s why most really good speakers stopped using Powerpoint in the traditional way. Throw away all slides that have more than ten words on them (or move them to an appendix).

It’s okay to use slides when they takes almost no focus off of you, the speaker.  That’s for two reasons.  The first is, the focus really should be on you, so having an Apple-like slide with one or two words on it is totally fine because it communicates a point and gets the focus back on you.  (Note—the only exception is when you demo your product.  Then you do want the attention on the screen.)  The second reason is even more important:  Powerpoint bullet slides take away your attention from your audience.  When you turn around to read a slide, you are forcing yourself out of your own rhythm.

Remember our goal is to speak like a normal person in public.  The best way to speak like a normal person is to actually talk to a real person, and not hundreds of people.  So, as I stand there about ready to speak – in my stance, rubbing my hands together – I look to the left side of the room and to the right side for a random person that seems comforting.  When I actually start speaking, all I want to do is speak to those two people. I’ve never met them but I want to lock in on those two people and just tell them a simple story as if they were sitting in my living room.  I can pace back and forth and look left and right in the crowd, and yet all I’m really doing is going back and forth between my two people.   It’s super simple; it totally works.

Um is a verbal tick.  It is unconscious and nearly impossible to remove.  If your career is going to be an actor, public speaker, politician, whatever . . .  go work on your ums and this post was never for you anyway.  If you are a normal person, you are not going to get rid of them.  And anyone who harps on you because of them is actually doing you a disservice because they are forcing you to speak differently than you speak as a normal person.  Paul Graham is one of my favorite public speakers, and he says um all the freaking time.  But, he’s a powerful speaker, he’s lucid and most importantly, he’s authentic.  Focus on what really matters.

Memorizing does absolutely nothing for you.  The only thing worse than a scripted, memorized speech is a ‘read’ speech.  So, don’t ever read your speeches, either.  You are pitching your start-up and trying to inspire people to believe in your vision.  It doesn’t matter what the actual words are, they’re all judging you anyway.  And when you memorize your speech, or read your speech, you are communicating that you suck at this.  And you don’t.  You’re a normal person – you have the capacity to speak like a normal person.

Over-practice can really hurt you, especially if you do it in a fake way.  One of the worst things you can do to prepare is to practice over and over again alone.  Because that is nothing like the situation that you are going to be in.  We speak very, very awkwardly alone.  When you are making passionate speeches inside of your car, you look like a crazy person and you feel like a crazy person.  Your performance there will be nothing like your performance on stage. Your goal, always remember, is to get back to how you speak in your living room.  So do that.

Ask your co-founders to put you on the spot in front of groups of people.  So, if you guys are at some random party, empower your co-founders to play this little trick on you:  Without giving you warning, they can yell out for everyone to get quiet because you want to tell them something.  You will have zero time to get nervous, you will have to start immediately, and you will do the best job that you can.  And if you do that five times before your big public speaking engagement, you will be far better prepared than if you had spoken to the mirror a hundred times.

One final note to that group of 150 people that just saw me speak:  Yes, I was absolutely, totally, freakin' nervous.  If that’s you as well, you already know how to reach me, let’s practice together.