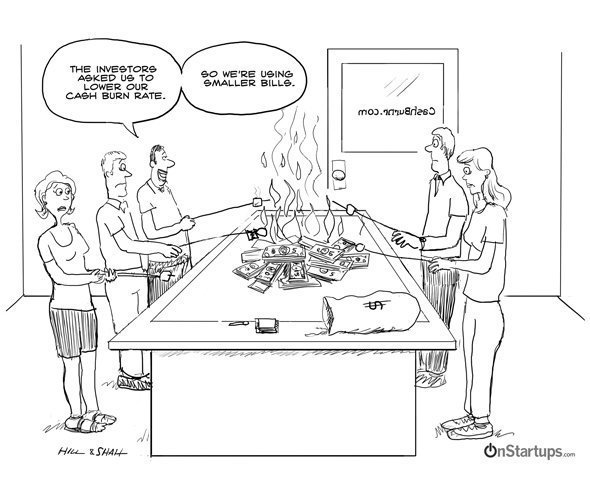 You're acting as if the current bubblicious fundraising environment will continue indefinitely.

You're acting as if all of your unproven hypotheses will turn out correct.

You're acting as if your seed round valuation increased your likelihood of success.

You're acting as if your investor excitement at the seed round automatically transfers to a bridge round.

You're acting as if you won't need to pivot.

You're acting as if Good Times RIP never happened.

You're acting as if you already have product-market fit.

You're acting as if you already know that you're the next Dropbox.

You're acting as if headcount is a definition of your success as an entrepreneur.

You're acting as if you've forgotten how to be scrappy.

You're acting as if being a cockroach is a bad thing.

Stop Acting As If

If you're seed-funded, you're probably spending money too quickly.  I'm seeing it everywhere right now.  Take honest stock of where you are in your startup.  What  true risks do you face?  What are proven data points and what remains as a hypothesis?

The traditional criteria for Series A funding is stable and significant month-over-month growth in traction and, for many of us, revenue.  If this isn't you, you need time to get there.  The ideal time to raise your A round is when you have stable growth for at least 4 months.  You still need 2-3 months in ideal situations to do the raise and you never want to be signing documents on fumes or they'll smell your desperation.  Combine all that with the fact that it's difficult to raise in Nov/Dec and June/July.  Now work backwards, how much time do you actually need?  Are you spending money too fast?

I bet most of you have to answer yes.

The Series A capital crunch is very, very real.  But it's not externally motivated.  There is no liquidity reason that explains why there's plenty of money available to seed concepts and not enough money available to A rounds.  In fact, the A rounds have just stayed the same, while the seed round funding has exploded.  My own view of the situation is that investors realized that it was worth throwing money at a good team in a big market in case they go on to build Dropbox.  By the time that team spends its seed money, it's pretty clear whether they're going to be a hit.  If you don't look like a home-run like Dropbox did that stage, you're not going to sail through your A round.  Investors are going to judge you through all the traditional Series A metrics and not the dreamy team-based standards that got you through the seed stage.

So what happens when you start to run low on seed cash but you haven't proved Dropbox-like traction or revenue yet?  You start thinking bridge round.  You go back to your investors and you gauge their interest.  These are the same investors that you forced to decide on you in less 39 seconds during your bubblicious seed round.  The same investors that felt like they overpaid for that initial equity or signed convertible debt with sky-high caps.  Even if they're good guys, even if they like you, even if they believe in your vision...they have a fiduciary duty to their LPs.  You will be significantly diluted or you will cease to exist.  For many of you, it will be the latter.

And it will be your fault.  You spent your money too fast.

For those that make it through bridge financing with heavy dilution, you will still report it to the world as a success.  Why wouldn't you?  Your investors will reiterate their faith in you to everyone that will listen.  Why wouldn't they?  No one will know that you had heavy losses.  As a startup community, we don't share our losses openly when the startup is still in process.  And for that reason, the data that backs up all my assertions won't be available for several years.  By that time, the hands will all have been played.  Don't wait for overwhelming evidence before you act.  Go get some advice, think hard, and then act decisively.

Prepare Now for The Series A Capital Crunch:

Adjust your runway to 18-24 months

For the typical seed-funded company that raises $750k to $1.5M, you should give yourself at least 18 months until you need your A round.  With 2 months of buffer, 2 months to raise the money, and 4 months of traction needed as evidence, that's 8 months taken out of that 18.  At least.  That gives you, at most, 10 months to find product-market fit.

Stop thinking that your headcount defines your progress as an entrepreneur.  Stop asking everyone how big their team is.  Keep your team small until there's overhwhelming proof that more people will equal more growth.  The BackType guys had a team of 3 and they did just fine!  Be a cockroach.

Raise more when you can

When things are going well, raise more money.  If your seed round was raised on convertible debt, don't wait for that equity round.  You may have 3-6 good months which are providing additional data on your company, but still far off from what you need for an A round.  If you can add on more money on good terms through more convertible debt, do it!

AngelList traction will explode in 2012.  If you have the ability to raise additional funds between rounds, AngelList is going to be the way you do it.  Keep your profile up to date.  Keep engaging with investors.  AngelList makes it easy on both sides to keep everyone aware of your progress.  If you have pent-up demand from an over-subscribed seed round, AngelList can help you broadcast some recent progress and pile on some back-up fuel.

Top companies get their A rounds pre-empted

If you're doing well, your A round will be pre-empted by smart investors. Recognize that the lack of a pre-empted A round means that you're going to have to really earn it.  If your investors are really pleased with your progress but not pre-empting the next round, than you should take their enthusiasm with a grain of salt.

Find an Adviser that will tell you straight

The best source of data on whether you're being realistic with your spending is from advisers that are still entrepreneurs and are only 18 months ahead of you.  Preferably a friend that has no financial interest in your company.  If you don't have someone like this, make sure you get one quickly.  Make sure it's someone that calls you on your shit.

If you were overzealous and you're reading this entire post with a sense of dread, the time to act is now.  Recall Sequoia's advice in the RIP deck--the CEOs that are decisive are the ones that last.  Believe me, I know how painful it is to let people go, especially good people.  But if you're running heavy, there's really no way to tighten the belt without reducing headcount.

Embrace austerity as a company culture

I know how it feels to be funded with other people's money.  After months or years of bootstrapping, of promising your cofounders and employees that everything would be better once you're funded, you just want to fulfill that promise.  It's so natural to overspend.  Resist that temptation.  Don't believe for a second that expensive perks are necessary to retain great talent.  The same truth in hiring holds now as it always has: engineers stay with companies that respect them and challenge them and, in the end, provide them a real opportunity to change the world.

That's it.  I've said my piece.  If I'm wrong, you'll just grow a little bit slower.  If I'm right, acting now may well reverse a failure into a success.  Slow it down.