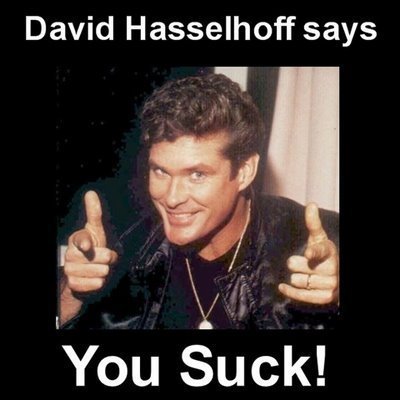 So there have been times that I’ve been a really sucky entrepreneur.  Our first company, OpenVote, was a web 2.0 company that built Facebook apps.  For years, I’ve said that it failed with all the other web 2.0 apps of the time, but really that’s just a convenient excuse.  It failed because I sucked as an entrepreneur.

Now, when I’m talking to entrepreneurs that are making a lot of the same mistakes I was making then, I’m shocked how naïve they are to their degree of suckiness .  Just as I was.

There’s something about being an entrepreneur that lends itself to this self-deception.   We entrepreneurs are not short on delusional optimism.  We thrive in environments where any rational person would say this is impossible or can’t be done.  With pride, we naturally ignore anyone that says that we are not capable.  We live our lives with this chip on our shoulder.

So, no, it’s not surprising that we are fully unable to see how much we suck.

My startup, 42Floors, just finished Y Combinator.  One of the incredible things about being in the Y Combinator program is you get to see dozens of other companies working right alongside you, and you get to watch at how quickly and effectively each of them progress.  And you compare yourself to them.  It’s unbelievably intimidating.

When we were doing Flightcaster in 2009, we had CarWoo,WePay and Bump in our batch with us.  Man, I looked over at those guys, and I was just blown away by their ability to execute.  It wasn’t an age thing – the WePay guys are younger than I am. They were just better.  It was at the same time intimidating, but also incredibly motivating to try to do better.

Ahhhhh, feels liberating just to say it.  We sucked.

It would be nice if there were some leading indicators that you were sucking so you could self correct earlier.  Actual concrete metrics.  Here they are…

As in, not having it.  As Paul Graham has now eloquently pointed out, growth is the purpose of a startup.  So, if you are growing, you are probably not sucking.  If you are not growing, you may have a problem.  And PG has even been nice enough to offer some clear metrics on growth:

A good growth rate during YC is 5-7% a week. If you can hit 10% a week you’re doing exceptionally well. If you can only manage 1%, it’s a sign you haven’t yet figured out what you’re doing.

So if you’re not growing quickly, you might not suck in your ability to execute, you may just be in the product-building phase.   So in absence of positive week-over-week growth metrics, my favorite metric to look at is pace of iteration.  In plain words, this is “how long does it take you to test out a new hypothesis?”

When we were building OpenVote, we launched version one in October of 2007.  We learned a whole bunch of different things, and then when we launched a second version in March 2008. Six months.  We raised enough money in that startup to last us about eighteen months.  That means we effectively had two to three experiments that were possible.  And that’s why I can now say that we sucked.  We were iterating so slowly that we never really gave ourselves a fighting chance to find the true product-market fit.

With 42Floors, I spent about six months in customer development phase.  Each iteration of our company was called a chapter.  Inc Magazine actually did a chapter-by-chapter breakdown of our process.  We had seven bad ideas before landing on what is currently 42Floors.  Each idea took about 3 ½ weeks to develop. We would learn from potential customers, create a prototype of the product, test it out on people, come up with some conclusions and then make a call on whether to continue or iterate.  That process took 3 ½ weeks.

You’ll notice I don’t penalize myself for having so many wrong ideas.   That’s every entrepreneur that’s ever built a truly disruptive startup.  Larry and Sergey had no idea that they would ever do search advertising.  PayPal was supposed to be for Palm Pilots.  Flickr was a dating site.  It’s okay to have the wrong initial idea, but it sucks if you don’t iterate quickly enough toward the right idea.

So a moment of truth time.

Take a hard look at your company’s progress and how you conduct yourself as an entrepreneur.  Paul Graham once said that the hardest part about investing in founders is that founders can change.  If you’re sucking now, that doesn’t mean you always will.  In fact, a little bit of honesty in your self-reflection may be the single best thing you can do to get yourself going on the right track.  And maybe, with some hard work, you too can suck a little less.