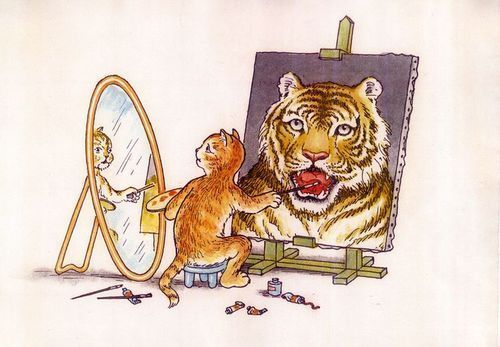 I’m not the most courageous guy. It’s been one of those little hidden truths that has always both haunted me and motivated me.

I remember playing a tennis match for my high school team.   It was overall rather insignificant, but I still remember it.  The rest of the team had split their matches, and I was the last one to finish so it was on me to help the team win.   I remember everyone gathering around my court, cheering me on.   We had tied the set, and we were going into the tie-breaker.

I won’t bore you with the melodramatic details of a 15-year-old’s quest for greatness in JV tennis.  But I still remember the feeling I had as I prepared to receive his serve.  All of my intensity, all my focus, all of my training led me to this one thought:  I wanted him to double fault.   I didn’t see myself successfully beating him on my own—I needed him to fail on his own.

Of course he didn’t.  We played some points – I won some, he won some.  In the end he took the match.

It bothered me then and it bothers me now.  I don’t like the way I stepped up for the challenge.  I was just waiting for him to make unforced errors.  It didn’t feel good at all.

I’ve been that same 15-year-old playing tennis many times in my various startups.  During each investment round at both OpenVote and Flightcaster (my last companies), I negotiated  poorly because I was so afraid of losing the deal.  The acquisition of FlightCaster was the same story.  I had the chance to walk away with a small win and so I took it.  It wasn’t some grand triumph; it was just avoiding failure.

I bring all this up because I haven’t made the same mistakes at 42Floors.  I don’t mean to say that I finally have found courage.  I really haven’t.  At every step along the way for 42Floors, I have been terrified about screwing it up.   But yet, I haven’t made the same mistakes this time around (at least not yet!).   Somehow I have found a way to not be as consumed by fear.

I wish I could say I’ve harnessed some deeper courage to take risks, believe in myself, yada yada yada.

But I don’t actually believe it be true.  I think I just hacked my brain a bit.  I knew a lack of courage was going to be a weakness going into 42Floors.  So I tried a few things to address it head-on.   Hopefully you find a few of these mind hacks helpful.

How to Fake Courage

Define your goal early and stay true to it

Early on, my cofounders and I agreed we would not stop short of fixing commercial real estate search world wide.  We would be singularly focused on building a big, successful company—even if that meant increasing our overall odds of failure.  That may sound trite, but I can tell you it has already impacted dozens of decisions.  My mindset during FlightCaster was to simply not fail.  Every time I could have rolled the dice, I took the risk-minimizing option.

At 42Floors, we’re okay with the prospect of failure. We’ll roll the dice every time to keep our full dream intact.  Investors/employees/customers can smell the difference.  We’ve said this from the beginning.  And in the beginning it’s really easy to say because you have nothing to lose anyway.  Now that our company is off the ground, we’ve simply gotten used to saying it.

Set a really big goal, go after it and ignore everything else.

What was so miserable about being on that tennis court as a 15 year old was that it was just me out there alone.

I’ve struggled at everything I have ever done.  It took me years to see this, but I finally see that every other entrepreneur has had the same problems I’ve had.  I did a YC a second time mostly because I wanted that community of peers again.  As I’ve mentioned before, if you can’t get into a YC, make your own.

Believe that you can change

Paul Graham once said the hardest part about being an early stage investor is thatfounders can change.  I was nervous when I applied to YC with 42Floors because I was afraid of repeating the same mistakes again.  But fuck that!  Those types of thoughts are worthless.  Focus on the opportunity you have right now and become the person that can get it done.

I am vastly different founder in this company than ever before.  I refuse to let my old weaknesses haunt me further.

Get a win under your belt

I have to include the acknowledgement here that this post is total bullshit.  I didn’t gain this mindset until we had already sold FlightCaster.  That win gave me a ton of confidence to swing bigger this time.

Don’t ever say you’re crushing it

Every time I hear an early stage entrepreneur talk about crushing it, I know they are fighting demons within themselves.  There’s nothing worse than pretending to the world that you’re doing better than you actually are.  All it does is isolate you even further. One of the most powerful parts of my blogging in the last few years is I’ve been able to share openly how hard things have been.  It’s taken an immense stress off of me personally.

So, to all you founders out there thinking that other everyone else possess some genetic gift of unending courage that you lack.  It’s not true.  They’ve just faked it better.  So can you.