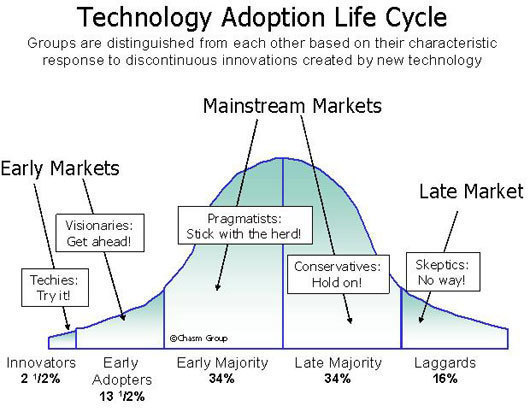 It's time that we all re-read Geoffrey Moore's book, Crossing the Chasm.  Seriously, stop whatever you're doing right now, download a copy to your kindle, and spend the next 3 hours reading. I started thinking more and more about Crossing the Chasm the past few days after judging a startup pitch competition. I'm no expert at picking which companies will do well and which won't.  In fact, I'm pretty adamant about not giving bullshit advice about another company's product.  I do, however, have very strong opinions about the process.  And during this round of pitches, I found myself asking the same question over and over again to the teams:

Why aren't you building your startup for early adopters?

Each team pitched awesome concepts for full-industry transformation.  One team wants to change the way research is done for major corporations.  Another plans to disrupt online dating.  And one is ready to transform HR process in the enterprise.  Big markets.  Disruptive ideas.  Awesome stuff.

And each team should stop everything they're doing and read Crossing the Chasm.  They need to re-orient their launch plan around marketing to early adopters.  While the investment pitch is often focused on how you'll transform an entire industry, your actual startup battle plan for launching your startup should be 100% focused on early adopters.

Moore's main point is that companies have a fairly predictable path they take on as they serve their users/customers.  The Crossing the Chasm part is really hard.  If you think back, some of our favorite startup success stories had to execute somewhat of a veer to jump the gap from early adopter to mass market.  Twitter was originally a tight community of geeky early adopters that were staying in touch with each other in real-time.  It crossed the chasm  when it became a popular way to follow celebrities or news such as CNN and Oprah.  And now it's approaching a near ubiquitous form of real-time communication, celebrity-folllowing, link-sharing, media distribution, etc.What if Twitter had started their company as a way for celebrities to broadcast their message to their fans?   Do you think it would have succeeded?  Moore would tell us no.  Celebrities and their fans aren't early adopters in the same way that Bijan Sabet or Robert Scoble are.  Twitter's early geek crowd got it off the ground and nurtured it to critical mass.  At that point, there was clear utility for CNN and Oprah to join in full force.

Don't cross the chasm until you have to. 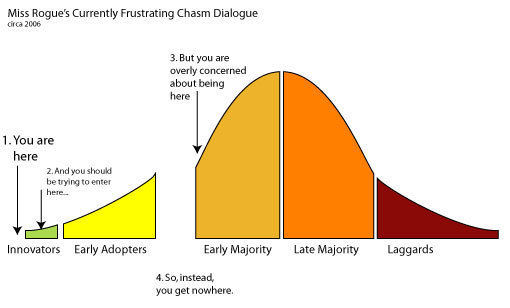 What I saw in all these startup pitches is that they were building their dream solution to a problem.  Fortune 1000 companies don't like to take risks with innovative startups, no matter how compelling the product.  They'll take meetings.  They'll get really excited about working together.  But before signing, they wait for a solution to be well-proven.  There's just no reason for an IT procurement manager to risk his job over some new startup that may hit the deadpool in the next 18 months.

It's okay to pitch to investors your ambitions for disrupting an entire industry, but don't smoke your own dope.  Build for early adopters.

And finally, if you're searching for office space in the Bay Area right now, let me know and we'll go to the ends of the earth to help you!