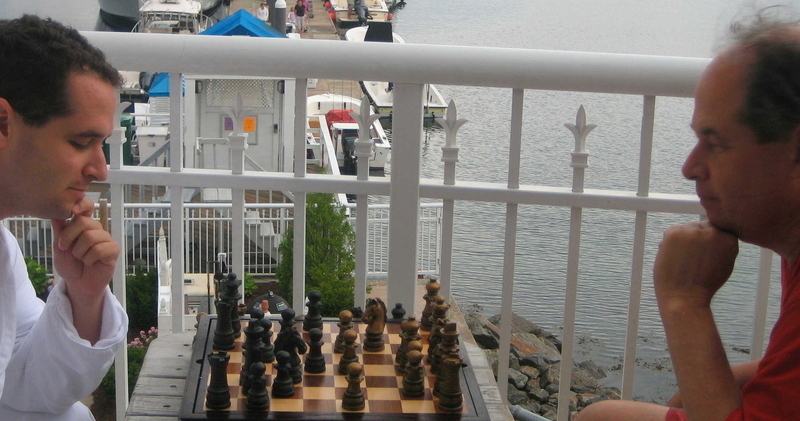 I love chess.  I love everything about it.  My Dad gave me a small, hand-carved chess set when I was 8 year old.  We would play up at the condo in the mountains on snowy evenings.  We played on vacations.  I always wanted to make sure he was playing his hardest.  God forbid he would let his 8 year old son beat him...

While I was going through my quarter-life crisis, travelling all over the world, I started collecting interesting chess sets in foreign countries.  While in Bolivia, I found a hand-carved chess set that was the size of a coffee table.  I had to have it.  I had to carry the base of that table in my lap for most of the 18 hour trip back to the states.  It was so worth it.

More recently, I've been playing Chess With Friends on the iPhone with one of my oldest friends Mike.  We average a little more than a game a month.  We must be 30 games in at this point. Sometimes when my phone buzzes with a new move notification, I get nervous.  I'm worried he's made a move I didn't predict.  Of course, this happens all the time, so my fears are justified.

When we hit the trough of sorrow with FlightCaster, Mike and I played pretty frequently.  There were a few mornings in which half the morning was wasted away thinking through moves.  In what was otherwise a pretty tough time emotionally, playing chess him was a welcomed reprieve.

Chess is comforting to me because it's an exercise in pure rationality.  At my level, still recreational, I can apply pure mental horse power to any problem and do fairly well.  Mike is a better player than me when it comes to strategy and experience with openings, so I often have to win by brute-forcing the visualizations of the moves.  If I do this, he does this, if he does that, I can do this...I've heard Bobby Fischer could think 14 moves ahead.  I can get up to about 7 until veins start popping out of my head.

Mike is also more gifted positioning player.  He understands at a more abstract level how to get his pieces into superior positions, even if it means giving up pieces in the process.  It's often a joy to watch...and incredibly frustrating.  If you play chess, you know the feeling.

Sometimes, while daydreaming, I wonder how similar chess is to startup life.  I've determined it's not.  I think there may be a lot of neat similarities to chess and entrepreneurship, but ultimately chess is too controlled.  One of the defining aspects of surving and thriving in startups is managing entropy.  Chess is calculated, predictable, strategic.  Chess is how startups look after they've already been successful and Harvard Business Review is writing cases about how the crystal clear vision of the genius founder translated into market domination.

But I've found a variation of chess that is a true equivalent to the chaos that is startup life.  It's called Bug House.  You're going to love it.

Bug House is a way to play team chess.  That's right.  Team chess.  4 people, 2 teams, 2 boards, 2 timers.  I was over at Dropbox with Ivan Kirigin and they introduced me to it.  No surprise, by the way, that those genius Dropbox guys are playing this insane game. They started playing a lot more recently after Makinde Adeagbo left Facebook and joined Dropbox, bringing the heat.  Just wait, Bug House may be to 2012 what Settlers of Catan was to 2010. (okay probably not, but still...) 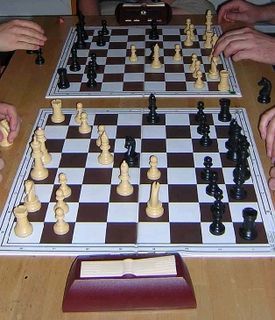 Here's how you play.

I played with Ivan as my partner.  Ivan played white versus his opponent.  I played black versus my opponent.  The win in Bug House goes to the team the logs the first victory, on either board, against that board's respective opponent.  So, if I beat my opponent, Ivan and I as a team would win.  Each game is separately timed with 5 minutes per side.

So we both start playing our games independently.  No interaction for the first few moves on each board.  However, when Ivan captured a pawn from his opponent (remember his opponent was playing black since Ivan was playing white), Ivan handed the white pawn to me!  I could now choose to move my normal turn or place the pawn anywhere on the board.

Take a second and visualize the craziness that began to ensue.    Here's a random youtube video of some guys playing.

Every time, I thought through a strategy even a few moves into the future, it would totally fall apart if my opponent magically received a rook or a bishop from his partner.   Half a dozen times, I faced certain checkmate when Ivan magically saved me with captured pieces.  At our best, Ivan and I would communicate our needs to each other.  But with that fucking timer, there was just no time so I would just capture pieces and give them to him.  There was no planning, no control, no time.

As time went down on both boards, we made incredibly fast moves.  I've used to regular speed chess.  I can see the board and make quick decisions.  That totally fell apart when the whole context of the game shifted dramatically move to move.  Veins were popping out of my head left and right.  I realized at one point that I had been holding my breath for too long.  Right, of all things, I also needed to remember to breathe.

By the way, Bug House is British slang for insane asylum.

And this my friends, is the perfect parable for startups.